Today’s session started with introducing a new environment.  Last time Valiente was in the indoor arena, he felt so trapped and terrified that it took Sarah an hour and a half to catch him.  Today, despite being in a place that he “knew” was scary (and we were wearing Halloween costumes!) he was able to stay calm after a slow start. 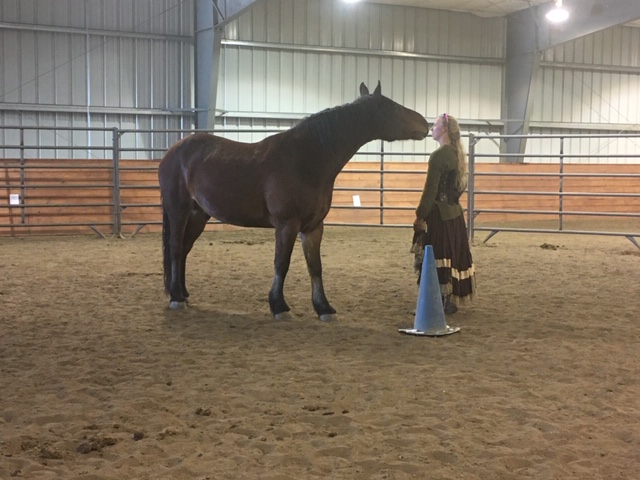 This is the new buzzword in the mustang world.  Instead of forcing horses to learn new things, essentially telling them to “get over it,” you allow them to choose when they are ready to learn.  The horse chooses to participate in the session by targeting the cone the first time – this is the “start button.”  The initial goal is for Valiente to learn to target the cone, just like targeting the halter.

Once he chooses to target the cone, Sarah starts doing things with his body that introduce pressure – petting, picking up feet, etc.  She doesn’t want to start asking him for things if he is already shut down – the start button essentially shows he is in a place where he is ready to learn. If he is shut down, he won’t learn anyway! The start button gives the horse control – they only learn when they are ready, which makes it more likely that they will be able to avoid the threshold swings that may not serve your training goals. This is especially true when dealing with a horse that has been through trauma.

Patience is the Name of the Game

The session took a little while to get underway because Valiente has primarily been worked in the outdoor round pen.  With a set range of variables (Sarah is the one working with him, it happens in the place he is familiar with) he is able to get to work very quickly.  As soon as a new variable was added, his initial behaviors were fearful. This is the point where it is easy to get frustrated – for some, it feels like the work you’ve been doing isn’t paying off.  This isn’t backsliding, it’s the horse slowly getting used to the idea that they don’t have to be vigilant all the time.  Instead, they can:

Remember – you are working with an animal with a nature that tells them to be wary, especially in new situations. When you stack previous trauma on top of that, you have a slow, steady race to run.

At the beginning of the session, his body language shows that he is still looking for an escape.  Disengaging the hip and getting him to move his feet is the first step.  This slowly gets him out of the zone where he is frozen and feels stuck (which can lead to him deciding to flee.).  For most horses this wouldn’t be a problem – for him, it is confirmation of his lack of trust in humans.

Starting to Generalize Those Lessons

After some patience, Valiente decides that he is comfortable enough to play the game and moseys over to the cone.  He still has a stretched body position and is wary of Sarah’s movements, but he has started to engage. As the session goes on, he gets bolder as he realizes this is no different than training outside.  After this, the session progresses to fine-tuning his response. For targeting the cone, he gets rewarded. For targeting a hand, he does not (our aim is not to produce a mouthy horse). He DOES get rewarded when he is able to let Sarah touch his face without trying to block her or shy away.  Here are the building blocks for Valiente to become comfortable with face grooming, for example.

Moving forward, “good” is used as the marker word to denote that he has performed the desired behavior.  This means the actual time between the behavior and the reward can become longer. If you are familiar with clicker training, it is the same idea. As with any kind of animal training, it is all about timing. Sometimes he thinks about problem-solving into something bigger, and sometimes he just shuts down.  Avoiding actions that cause him to flee and allowing him time to problem solve, Sarah is creating a thinking horse rather than a reacting horse. When Sarah is standing close, targeting the cone requires him to come into her space, which is intimidating.  Again, he is able to overcome this after some patience.

The Sky is the Limit

Using this type of training, if Sarah stops giving him a reward, he starts experimenting with doing more in order to get it.  This is how you continue to add complexity to the behaviors you are trying to train.  All of this illustrates how a very simple training tool (targeting the cone) can be used to teach different lessons. Focus, problem-solving skills, the concept of having control in their world, a fun game, or the beginning of trick training.

Check out the horses available for adoption (including Valiente) here!